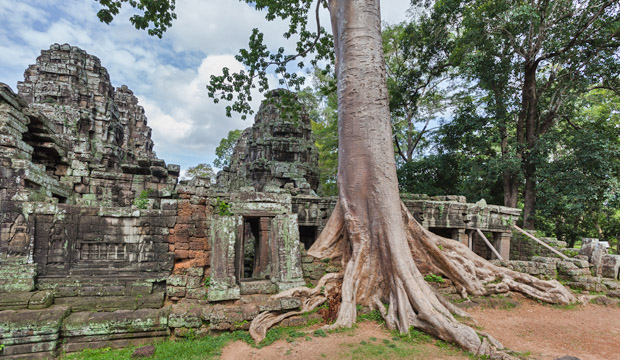 Banteay Kdei (Khmer: ប្រាសាទបន្ទាយក្តី; Prasat Banteay Kdei), meaning "A Citadel of Chambers", also known as "Citadel of Monks' cells", is a Buddhist temple in Angkor, Cambodia. It is located southeast of Ta Prohm and east of Angkor Thom. Built in the mid-12th to early 13th centuries AD during the reign of Jayavarman VII (who was posthumously given the title "Maha paramasangata pada"), it is in the Bayon architectural style, similar in plan to Ta Prohm and Preah Khan, but less complex and smaller. Its structures are contained within two successive enclosure walls, and consist of two concentric galleries from which emerge towers, preceded to the east by a cloister.

This Buddhist monastic complex is currently dilapidated due to faulty construction and poor quality of sandstone used in its buildings, and is now undergoing renovation. Banteay Kdei had been occupied by monks at various intervals over the centuries until the 1960s.

The Banteay Kdei, one of the many Angkor temples, is located in the Angkor Archaeological Park of 400 square kilometres (150 sq mi) area. The ancient city of Angkor during the Khmer Empire extended from Tonle Sap to the Kulen hills covering a vast area of 1,000 square kilometres (390 sq mi).[5] The temple is approached from the east gopura of Ta Prohm along a 600 metres (2,000 ft) path. This path leads to the west gate entrance gopura of Banteay Kdei. It is 3 kilometres (1.9 mi) east of Angkor Thom.

The name Banteay Kdei originates from an earlier name, Kuti, which is mentioned in the Sdok Kak Thom. This stele describes the arrival of Jayavarman II to the area, "When they arrived at the eastern district, the king bestowed an estate and a village called Kuti upon the family of the royal chaplain." This royal chaplain was the Brahman scholar Sivakaivalya, his chief priest for the Devaraja cult.

The Khmer Empire lasted from 802 to 1431, initially under Hindu religious beliefs up to the end of the 12th century and later under Buddhist religious practices. It was a time when temples of grandeur came to be built and reached a crescendo during the reign of Suryavarman II until 1191, and later in the 12th–13th centuries, under Jayavarman VII. Many Buddhist temples were built, including the Banteay Kdei, from middle of the 12th century to early 13th century. Though Jayavarman VII was credited with building many temples, he was also accused of squandering money on extravagant temple building projects at the expense of society and other duties. He built Buddhist temples in which Bodhisattva Avalokitesvara was the main deity. This temple built, conforming to the style of the Ta Prohm and Preah Khan temples in the vicinity during the same period by Jayavarman VII, but of a smaller size, was built as a Buddhist monastic complex on the site of a 10th-century temple built by Rajendravarman. Some small inscriptions attest to the building of this temple by Jayavarman VII and the royal architect, Kavindrarimathana.

Jayavarman VII had come to power at the age of 55 after defeating Chams who had invaded Angkor and subjected it to devastation. His "prodigious activity" resulted in the restoration of Cambodia from its ruins. He was chiefly the architect of the rebuilt capital at Angkor Thom and was called a "Great Builder". He was responsible for building many temples, which apart from Banteay Kdei, included the central temple of the Bayon, Prah Khan, Ta Prohm and many others, and also many rest houses for pilgrims. The reasons for building this temple at its present site is not known. However, it is established that the temple is a contemporary of the Angkor Wat as many similarities have been identified between the two, and also with Phimai temple in Thailand. It is reported to be the first temple built by Jayavarman VII in 1181 AD, opposite to the Srah Srang reservoir.

The temple, which for several centuries after the Khmer reign ended, remained neglected and covered with vegetation. It was exposed after clearing the surrounding overgrowth of vegetation in 1920–1922. This work was carried out under the guidance of Henri Marchal (then Conservator of Angkor) and Ch. Battuer, by adopting a conservation principle which was known as "the principle of anastylosis, which was being employed very effectively by the Dutch authorities in Indonesia". It was partially occupied by Buddhist monks till the 1960s.

For ten years till March 2002, Sophia University Mission or the Sophia Mission of Japan carried out several Archaeological research at the Banteay Kdei temple. During these investigations, a cache of fragments of 274 Buddhist statues made in sandstone, along with a few metal art pieces, were unearthed, in 2001. Plans to build a storage room to house the statues was also planned.