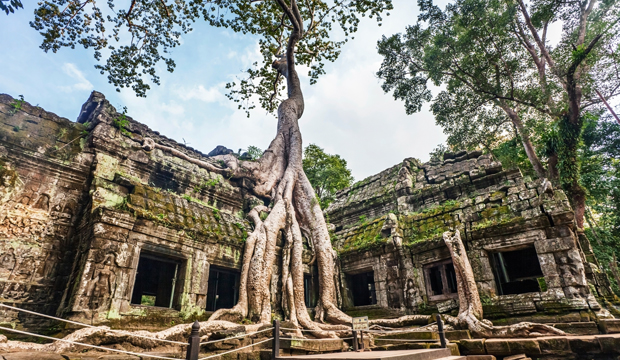 Ta Prohm is the modern name of a temple at Angkor, Siem Reap Province, Cambodia, built in the Bayon style largely in the late 12th and early 13th centuries and originally called Rajavihara. Located approximately one kilometre east of Angkor Thom and on the southern edge of the East Baray, it was founded by the Khmer King Jayavarman VII as a Mahayana Buddhist monastery and university. Unlike most Angkorian temples, Ta Prohm has been left in much the same condition in which it was found: the photogenic and atmospheric combination of trees growing out of the ruins and the jungle surroundings have made it one of Angkor's most popular temples with visitors.

After ascending the throne of Cambodia in 1181 A.D., Jayavarman VII embarked on a massive program of construction and public works. Rajavihara ("royal temple"), today known as Ta Prohm ("ancestor Brahma"), was one of the first temples founded pursuant to that program. The stele commemorating the foundation gives a date of 1186 A.D.

Jayavarman VII constructed Rajavihara in honor of his family. The temple's main image, representing Prajnaparamita, the personification of wisdom, was modelled on the king's mother. The northern and southern satellite temples in the third enclosure were dedicated to the king's guru and his elder brother respectively. As such, Ta Prohm formed a complementary pair with the temple monastery of Preah Khan, dedicated in 1191 A.D., the main image of which represented the Bodhisattva of compassion Lokesvara and was modelled on the king's father.

The temple's stele records that the site was home to more than 12,500 people (including 18 high priests and 615 dancers), with an additional 80,000 souls in the surrounding villages working to provide services and supplies. The stele also notes that the temple amassed considerable riches, including gold, pearls and silks. Expansions and additions to Ta Prohm continued as late as the rule of Srindravarman at the end of the 13th century.

After the fall of the Khmer empire in the 15th century, the temple of Ta Prohm was abandoned and neglected for centuries. When the effort to conserve and restore the temples of Angkor began in the early 20th century, the École française d'Extrême-Orient decided that Ta Prohm would be left largely as it had been found, as a "concession to the general taste for the picturesque." According to pioneering Angkor scholar Maurice Glaize, Ta Prohm was singled out because it was "one of the most imposing [temples] and the one which had best merged with the jungle, but not yet to the point of becoming a part of it". Nevertheless, much work has been done to stabilize the ruins, to permit access, and to maintain "this condition of apparent neglect."

As of 2010, however, it seems Archaeological Survey of India has undertaken a more aggressive approach to restoration. All the plants and shrubs have been cleared from the site and some of trees are also getting removed. A crane has been erected and a large amount of building work is underway to restore the temple, with much of the work seemingly just rebuilding the temple from scratch as at other sites. Wooden walkways, platforms, and roped railings have been put in place around the site which now block some of the previously famous postcard photo opportunities

The design of Ta Prohm is that of a typical "flat" Khmer temple (as opposed to a temple-pyramid or temple-mountain, the inner levels of which are higher than the outer). Five rectangular enclosing walls surround a central sanctuary. Like most Khmer temples, Ta Prohm is oriented to the east, so the temple proper is set back to the west along an elongated east-west axis. The outer wall of 1000 by 650 metres encloses an area of 650,000 square metres that at one time would have been the site of a substantial town, but that is now largely forested. There are entrance gopuras at each of the cardinal points, although access today is now only possible from the east and west. In the 13th century, face towers similar to those found at the Bayon were added to the gopuras. Some of the face towers have collapsed. At one time, moats could be found inside and outside the fourth enclosure.

The three inner enclosures of the temple proper are galleried, while the corner towers of the first enclosure form a quincunx with the tower of the central sanctuary. This basic plan is complicated for the visitor by the circuitous access necessitated by the temple's partially collapsed state, as well as by the large number of other buildings dotting the site, some of which represent later additions. The most substantial of these other buildings are the libraries in the southeast corners of the first and third enclosures; the satellite temples on the north and south sides of the third enclosure; the Hall of Dancers between the third and fourth eastern gopuras; and a House of Fire east of the fourth eastern gopura.