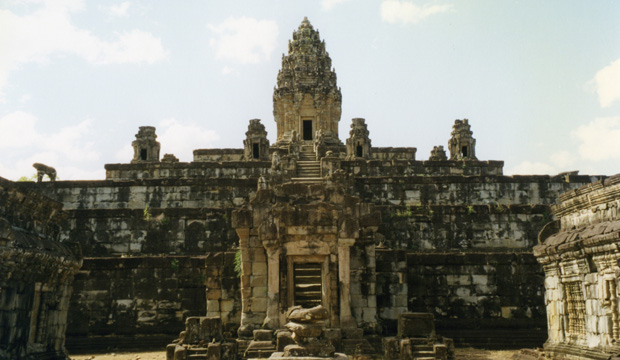 Bakong (Khmer: ប្រាសាទបាគង) is the first temple mountain of sandstone constructed by rulers of the Khmer empire at Angkor near modern Siem Reap in Cambodia. In the final decades of the 9th century AD, it served as the official state temple of King Indravarman I in the ancient city of Hariharalaya, located in an area that today is called Roluos.

The structure of Bakong took shape of stepped pyramid, popularly identified as temple mountain of early Khmer temple architecture. The striking similarity of the Bakong and Borobudur temple in Java, going into architectural details such as the gateways and stairs to the upper terraces, suggests strongly that Borobudur was served as the prototype of Bakong. There must have been exchanges of travelers, if not mission, between Khmer kingdom and the Sailendras in Java. Transmitting to Cambodia not only ideas, but also technical and architectural details of Borobudur, including arched gateways in corbelling method.

In 802 AD, the first king of Angkor Jayavarman II declared the sovereignty of Cambodia. After ups and downs, he established his capital at Hariharalaya. Few decades later, his successors constructed Bakong in stages as the first temple mountain of sandstone at Angkor. The inscription on its stele (classified K.826) says that in 881 King Indravarman I dedicated the temple to the god Shiva and consecrated its central religious image, a lingam whose name Sri Indresvara was a combination of the king's own and the suffix "-esvara" which stood for Shiva ("Iśvara"). According to George Coedès, the devarāja cult consisted in the idea of divine kingship as a legitimacy of royal power, but later authors stated that it doesn't necessarily involve the cult of physical persona of the ruler himself.

Bakong enjoyed its status as the state temple of Angkor for only a few years, but later additions from the 12th or 13th centuries testify that it was not abandoned. Toward the end of the 9th century, Indravarman's son and successor Yasovarman I moved the capital from Hariharalaya to the area north of Siem Reap now known as Angkor, where he founded the new city of Yaśodharapura around a new temple mountain called Bakheng.