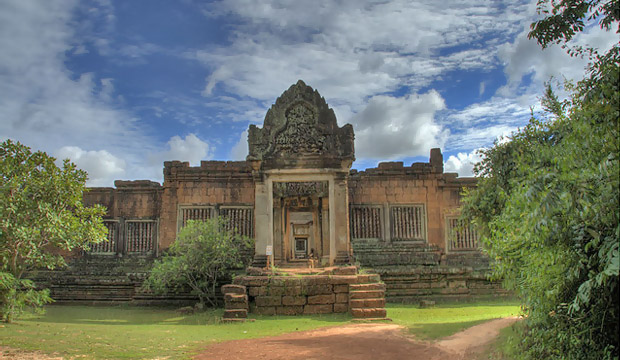 Banteay Samré (Khmer: ប្រាសាទបន្ទាយសំរែ) is a temple at Angkor, Cambodia located east of the East Baray. Built under Suryavarman II and Yasovarman II in the early 12th century, it is a Hindu temple in the Angkor Wat style.

Named after the Samré, an ancient people of Indochina, the temple uses the same materials as the Banteay Srei.

Banteay Samre is located 400 meters (1,312 miles) east of the East Baray. It can be accessed by enter and leave Banteay Samre from the east.

Banteay Samre is one of the most complete complexes at Angkor due to restoration using the method of anastylosis. Unfortunately, the absence of maintenance over the past 20 years is evident.

The name Samre refers to an ethnic group of mountain people, who inhabited the regions at the base of Phnom Kulen and were probably related to the Khmers. No inscription has been found for this temple, but the style of most of the architecture is of the classic art of the middle period similar to Angkor Wat. The monument most likely dates from the same period, or, perhaps, slightly later, although there are additions attributed to the Bayon style.

The proportions of Banteay Samre are plended. A unique feature is an interior moat with laterite paving, which when filled with water must have given an ethereal atmosphere to the temple. All of the buildings around the moat are on a raised base with horizontal mouldings, decoreated in some areas with figures framed by lotus buds.