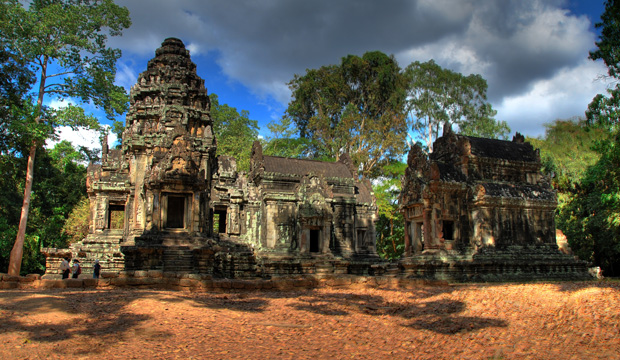 Chau Say Tevoda (Khmer: ប្រាសាទចៅសាយទេវតា) is a temple at Angkor, Cambodia. It is located just east of Angkor Thom, directly south of Thommanon across the Victory Way (it pre-dates the former and post-dates the latter). Built in the mid-12th century, it is aHindu temple in the Angkor Wat period. The temple is dedicated to Shiva and Vishnu, and with unique types of female sculptures ofdevatas enshrined in it. The Buddha images in the temple have been interpreted to have been built during the reign ofDharanindravarman, father of Jayavarman VII, who ruled from Preah Khan of Kompong. The temple was in a dilapidated state with 4,000 of its elements lying scattered on the embankment and in the Siem Reap River. Many of these elements were used in the restoration work carried out by a Chinese team between 2000 and 2009 under a restoration project sponsored by the People's Republic of China. The temple was reopened in late 2009.