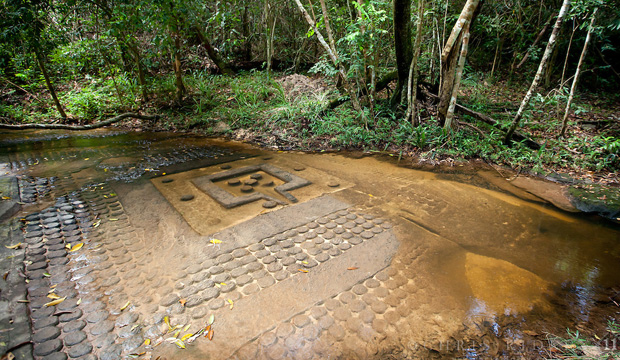 Kbal Spean ("Bridge Head") is an Angkorian era archaeological site on the southwest slopes of the Kulen Hills to the northeast of Angkor in Siem Reap District, Siem Reap Province, Cambodia. It is situated along a 150m stretch of the Stung Kbal Spean River, 25 kilometres (16 mi) from the main Angkor group of monuments.

The site consists of a series of stone rock relief carvings in sandstone formations of the river bed and banks. It is commonly known as the "Valley of a 1000 Lingas" or "The River of a Thousand Lingas". The motifs for stone carvings are mainly myriads of lingams (phallic symbol of Hindu god Shiva), depicted as neatly arranged bumps that cover the surface of a sandstone bed rock, and lingam-yoni designs. There are also various Hindu mythological motifs, including depictions of the gods Shiva, Vishnu, Brahma, Lakshmi, Rama, and Hanuman, as well as animals (cows and frogs).

Kbal Spean is described as "a spectacularly carved riverbed, set deep in the jungle to the northeast of Angkor".[4] The river over which the bridge head exists is also known as Stung Kbal Spean, a tributary of the Siem Reap River that rises in the Kulein mountains north of Banteay Srei. The river bed cuts through sandstone formations, and the many architectural sculptures of Hindu mythology have been carved within the sandstone. The archaeological site occurs in a stretch of the river starting from 150 metres (490 ft) upstream north of the bridge head to the falls downstream. The river, being sanctified by flowing over the religious sculptures, flows downstream, bifurcating into the Siem Reap River and Puok River, which eventually flows into the Tonlé Sap Lake after passing through the plains and the Angkor temple complex.

The archaeological site is in the western part of the Kulein mountains within the Phnom Kulen National Park. Approach is from the Banteay Srei temple by a road which is about 5 kilometres (3.1 mi) from an army camp. Thereafter, it is a 40-minute walk through the forest for about 2 kilometres (1.2 mi) uphill along a path before reaching the first site, a water fall, where the carved sculptures start appearing in the river bed.

The carving of vestiges began with the reign of King Suryavarman I and ended with the reign of King Udayadityavarman II; these two kings ruled between the 11th and 12th centuries. The 1,000 lingas, but not other sculptures, are attributed to a minister of Suryavarman I during the 11th century, and these were carved by hermits who lived in the area. Inscriptions at the site testify to the fact that most of the sculpting was done during the reign of Udayadityavarman II. It is also mentioned that King Udayadityavarman II consecrated a golden ling here in 1059 AD. It is believed that the Siem Reap River flowing into Angkor is blessed by the sacred lingas over which it flows.

The archaeological site was discovered in 1969 by Jean Boulbet, an ethnologist, but further exploration was cut off due to the Cambodian Civil War. The site regained prominence for safe visits from 1989.