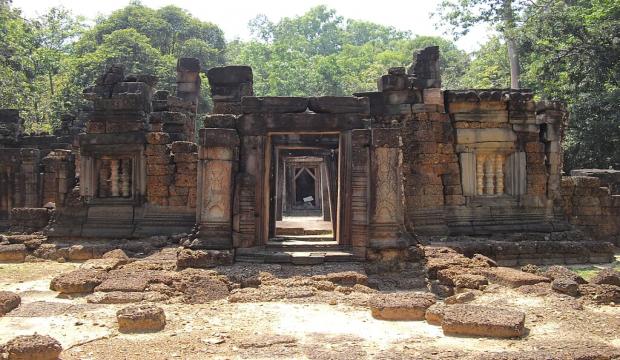 Krol Ko is a small Buddhist temple from the 12th century. Its name means “Park of the Oxen” and it lies only about hundred meters north from the artificial island Neak Pean  nearby the Grand circuit.

The Temple Krol Ko was erected by the King Jayavarman VII in the end of the 12th century.

The temple buildings – a tower and a so-called “library” – are surrounded by two walls. The purpose and the function of, for Khmer architecture typical, “library”-buildings is unknown. The central temple tower of Krol Ko is erected in the middle of a cross-shaped terrace.

The most interesting items at Krol Ko are the pediments on the ground.  Also two restaurated  triangular pediment one with Avalokitesvara standing on a lotus surrounded by devotees and another one with a scene of Krishna who lifts Mount Govardhana with his little finger to shelter the shepherds.