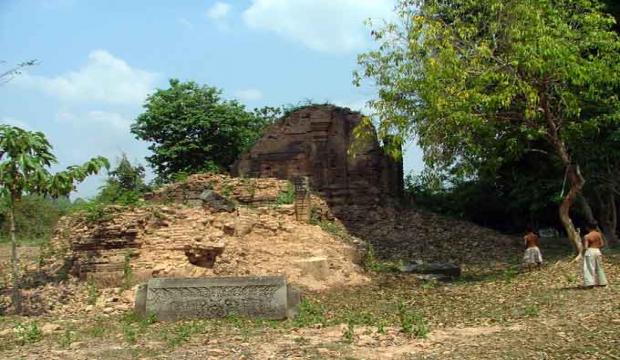 As with Ak Yum (see earlier post), Kutisvara temple is another of those minor Angkor temples who’s historical importance is equalled by it’s lack of tourist cachet! The 3 unspectacular and ruined brick towers are never going to get 5* in any temple guide but it is considered by many historians to be the oldest temple in the entire central Angkor area, so as such one of the most significant from an archeological points of view.

The central of the 3 towers is thought to date to the late 8th or early 9th century and the reign of Jayarvarman II making Kutisvara, (sometimes spelt Kutishvara),  contemporary with the oldest sites at Rolous, (e.g. Trapaeng Phong), and the western end of the Western Baray, (Ak Yum etc). but the earliest in the central part of the historical park.  The temple is situated between the south eastern corner of Ta Prom and the north western angle of Sra Srang – lying just off, but still visible from, the north side of the road running between Ta Prom and Banteay Kdei.