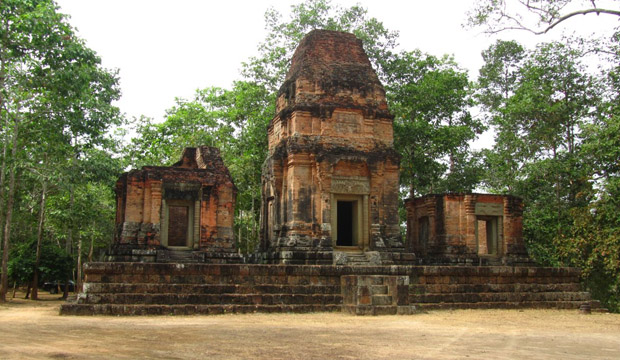 The Prasat Bei is an early 10th century Hindu temple built by King Yasovarman I. The small temple was dedicated to Shiva and oriented towards the East. Its name translates to “the three towers”.

The sanctuary towers are located about 300 meters West of the South gate, between the Phnom Bakheng temple and the moat surrounding Angkor Thom. Their style reminds of the Prasat Kravan, that has five towers built around the same time.

The Prasat Bei consists of a line of three brick towers on a single laterite platform. A single staircase in front of the central tower gives access to the platform, that is aligned North South measuring 24 meters long by 10 meters wide. The diminishing tiers on top of the sanctuaries are missing, except for the central tower.

The North tower was never finished; the sculptures on the lintel over the doorway is only a rough outline. The lintels on the central and South tower contain depictions of Indra on the three headed elephant Airavata. The central sanctuary houses a linga set on a pedestal.