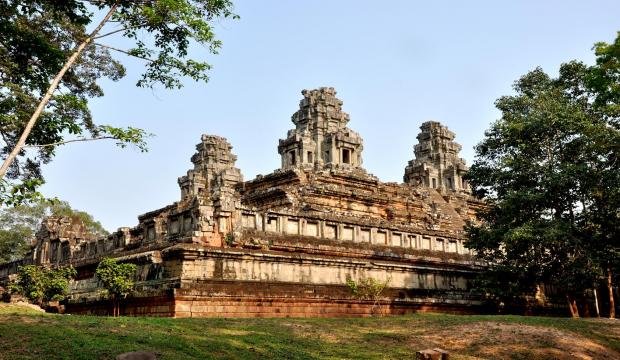 Ta Keo (Khmer: ប្រាសាទតាកែវ) is a temple-mountain, in Angkor (Cambodia), possibly the first to be built entirely of sandstone by Khmers.

Ta Keo had to be the state temple of Jayavarman V, son of Rajendravarman, who had built Pre Rup. Like Pre Rup, it has five sanctuary towers arranged in a quincunx, built on the uppermost level of five-tier pyramid consisting of overlapping terraces (a step pyramid), surrounded by moat, as a symbolic depiction of Mount Meru. Its particularly massive appearance is due to the absence of external decorations, as carving had just begun when the works stopped,[1] besides an elaborate use of perspective effects. It is considered an example of the so-called Khleang style.

The main axis of the temple is E-W and a causeway 500 meters long connects its eastern entrance to a landing stage on the Eastern Baray, with which Ta Keo was in tightly relationship.[2] The outer banks of the surrounding moats, now vanished, measure 255 m by 195 m.

The first terrace is 122 m by 106 m, its wall of sandstone on laterite basis constitutes the outer enclosure. Along the east side there are two long galleries, whose roofs were probably in wood and tiles. They were illuminated by balustraded windows.

The second terrace is 5.5 m higher. Each of the first two terraces has a gopura at the four cardinal points. Each gopura has three independent passages and a central tower with diminishing tiers.

A continuous gallery (1.4 m width) constitutes the inner enclosure of the second terrace. It has windows only towards the interior and measures 80 m by 75 m. It's really interesting, because it has no door and seems to be purely decorative, and is the first example of Khmer gallery (together with Phimeanakas). Before Ta Keo (e.g. in Pre Rup) there were long buildings that followed the length of enclosures with some discontinuity.[4] However it hasn't a stone vault, probably its roof was made of wood and tiles too.

Along the eastern side of the second terrace in the corners there are two buildings that are the shorter version of the long galleries of the first terrace. More towards the central axis[5] there are two little sandstone "libraries", opening to the west, with false windows on upper storeys.

The final pyramid rises 14 m in three narrow steps from the second terrace. Its base is 60 m square, the summit is 47 m square and stands 21.5 m above the ground. The four stairways that lead on the summit are continuous and very steep. At the foot of the eastern one there is a statue of a kneeling Nandi, which confirms that Ta Keo was a Shivaite temple. The absence of any decoration makes the final pyramid really massive. However, on the east face some damaged carvings of floral patterns are still visible.

The four corner towers on the summit stand on 0.8 m high basements and open to the four cardinal points with protruding vestibules. In the central tower, which dominates the others from its basement 4 meters high, the vestibules are doubled. Fragments of lingas and several statues were found in the sanctuary chambers (some 4 meters wide) and around the towers. The central tower reaches a height of 45 meters.

Jayavarman V was ten years old when he succeeded his father, Rajendravarman, in 968. His early years of reign were rather turbulent and the court officials dominated the royal politics. When he was aged seventeen (in 975), he began the construction of his own state temple, whose modern name is Ta Keo, that was dedicated some time around 1000. In contemporary inscriptions it is called Hemagiri or Hemasringagiri ("the mountain with golden summits").[8] It remained unfinished until the reign of Suryavarman I.[9]:135 Yogisvarapandita, a high priest who became minister of Suryavarman I and "received" the temple from him many years later, says in inscriptions that a lightning strike hit the unfinished building, an evil omen, so the works stopped. Maybe works stopped simply because of the death of Jayavarman V, as there was a struggle for succession. Actually the temple worked continuously as a cult center until the 13th century, and even Yogisvarapandita worshipped the shrines at the first levels of the temple.

A term tightly linked to Hemasringagiri is Jayendranagari (which in Sanskrit means "capital of the victorious king"), the royal palace or maybe the new capital city of Jayavarman V. However the remains of this large hypothesized ensemble are very scarce. Today only a tower in the south-west survives, similar to the corner towers of Ta Keo, with an unusual single door to the south.