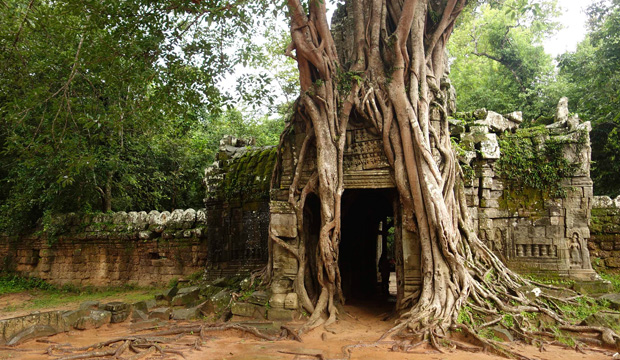 Ta Som (Khmer: ប្រាសាទតាសោម) is a small temple at Angkor, Cambodia, built at the end of the 12th century for King Jayavarman VII. It is located north east of Angkor Thom and just east of Neak Pean. The King dedicated the temple to his father Dharanindravarman II (Paramanishkalapada) who was King of the Khmer Empire from 1150 to 1160. The temple consists of a single shrine located on one level and surrounded by enclosure laterite walls. Like the nearby Preah Khan and Ta Prohm the temple was left largely unrestored, with numerous trees and other vegetation growing among the ruins. In 1998, the World Monuments Fund (WMF) added the temple to their restoration program and began work to stabilise the structure to make it safer for visitors.

Designed to be entered from the east, Ta Som is surrounded by a moat and enclosed by three laterite walls which are broken by two sets of gopura (entrance ways). The gopuras are cross-shaped and contain a small room on each side along with windows containing balusters. The main structure of the gopura are carved with four faces in the Bayon style.[1] The eastern outer gopura has been overgrown by a sacred fig (Ficus religiosa) which has grown down through the blocks that make up the gopura and into the ground.[3] The inner section of the temple consists of a central cruciform sanctuary with porches at each arm surrounded by four corner pavilions. Two small libraries sit on either side of the eastern entrance path.