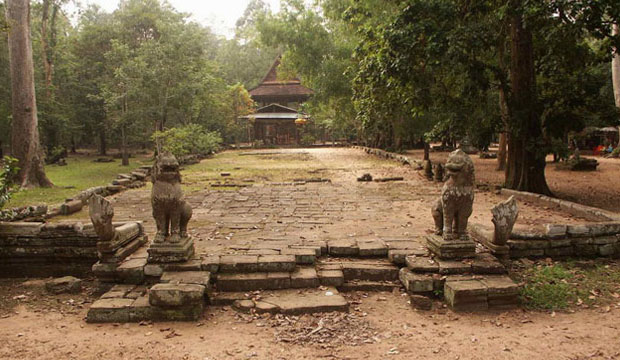 Tep Pranam is the ruins where the court is located septentrional. You can see the lion image on both sides of the going/participating road whose width is wide.

A long walkway with a Buddha figure at the far end. Tep Pranam was originally a Buddhist shrine in the 9th century under Yasovarman I, the king that moved the capital to Angkor. It was expanded over the years with 12th century balustrades, 13th century lions and significant post-Angkorian modifications and additions. The Buddha statue at the western end is made from reused material. It is unclear how long that particular Buddha has been there.

Tep Pranam is located inside Angkor Thom in the Area of the Angkor Archaeological Park in Siem Reap, Cambodia. Follow along the laterite causway just north-west of the Terrace of the Leper King and the Royal Enclosure.  Any Tuk Tuk drive can take you there.

Here is a beautiful example of a building which will have evolved during centuries and of the builders. The first Buddha would have been built by Yasovarman 1st during the construction of first Angkor. But the beautiful stone alley which leads to this Buddha him would be posterior, as well as the statues which decorate this alley. Today, the statue of the Buddha is covered with a contemporary construction which is not better effect, but one will like nevertheless to press foot these flagstones which have to see passing so much from world, anonymities, noble or Kings!

Nowadays Tep Pranam is a site of Theravada Buddhist worship with a giant Buddha seated on a lotus, built from sandstone blocks. In front of the statue you can witness praying monks or locals bringing offerings.